Janet Schlapkohl is an experienced headline performer for corporate events and conferences. If you are interested in commissioning a piece or contracting Janet to perform at your event, please email Janet at schlapkohl.janet@gmail.com 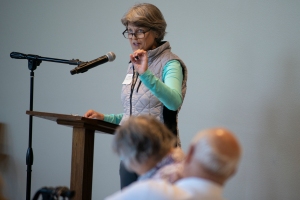 TRAIL of Johnson County Event: Invisibility, elderly cats, and swimming raccoons: An irreverent look at aging and its surprises (October 2019)

Aging is full of challenges, many of which can be made lighter by laughter. That’s the approach taken by local actor and award-winning playwright Janet Schlapkohl, who understands the power of humor in dealing with the many life changes that come with growing older. In her laugh-out-loud monologue entitled “Invisibility, elderly cats, and swimming raccoons: An irreverent look at aging and its surprises,” Schlapkohl weaves her own experiences as the daughter of aging parents and spouse of a large-animal veterinarian into a funny, edgy, yet loving look at the so-called golden years, tarnish and all.

Janet Schlapkohl’s play Bread, Roses, and Buttons: Pearl McGill and the 1912 Lawrence Textile Strike was first performed during Women’s History Month at the Iowa Women’s Archives. Pearl McGill played a leading role in the work stoppage of 25,000 New England textile workers, famously known as the “Bread and Roses” strike. But the seeds of her activism were sown in Iowa’s pearl button industry in Muscatine where McGill advocated for the labor rights of 2,500 men, women, and children who faced poor wages and working conditions in the city’s numerous button factories.

Here, I’m Hank was commissioned and toured the state of Iowa as a part of German Iowa and the Global Midwest, a series of statewide events exploring Iowa’s German history sponsored as a collaborative effort by several departments at the University of Iowa.

Voice Lessons was commissioned by the Iowa Labor Center and performed across the state of Iowa. This short play by Janet Schlapkohl introduces audiences to the intertwined work, family, education, and migration experiences of three women characters who help each other find their voices and change their lives. The play is based in part on the experiences of local low-wage and immigrant workers who have experienced wage theft (the non-payment or underpayment of legally owed wages), and the performance is designed to serve as an innovative platform to engage and educate audiences about labor and human rights violations.